May 28, also known as National Burger Day, has already come and gone. At The 4 Way Bar, however, we believe that burgers deserve to be celebrated every day of the year. In today’s post, we’re going to explore the rich (and savory) history of hamburgers and tell you a few interesting facts you probably haven’t heard.

Your mouth is undoubtedly going to water before we finish writing today’s post, so why not stop by our bar and grill for a bite to eat when you’ve finished reading? The 4 Way Bar is considered by many to be the best restaurant in Lakehills, and we think you’ll agree as soon as you get your meal. Check out our menu and come by today!

Did you know that hamburgers aren’t a distinctly American food? While we’ve certainly adopted hamburgers and made them our own, the roots of the burger as we know it today trace back to Hamburg, Germany. 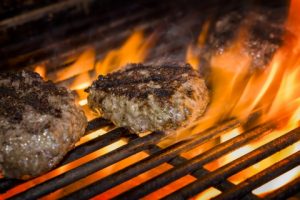 In the early 19th century, beef from German Hamburg cows was formed into steak-like patties along with garlic, onions, pepper, and salt. The patties were then cooked and served without buns or bread — they were similar to the steaks we’re familiar with today, and not just in appearance. Hamburg beef was of the highest quality and came with a high price tag to match!

Do you know how many burgers are eaten by Americans each year? If you guessed 50 million, you’re off by approximately 49,999,999,950. That’s right — Americans eat roughly 50 billion hamburgers each and every ear. At our current population, that’s roughly three burgers a week for every person in the country!

If the figure alone doesn’t surprise you, the implications might. If you were to circle all of the burgers Americans consume each year around the planet, the line would be long enough to circle the globe 32 times. That’s almost 800,000 miles of hamburgers eaten every year!

Hamburgers aren’t just popular in the United States. In fact, they account for approximately 60% of the burgers sold around the world! We won’t name them in today’s post, but a certain fast-food chain famous for their burgers sells about 75 hamburgers every second. That’s 270,000 an hour! That said, they certainly can’t match the quality of the food you’ll get at The 4 Way Bar!

Take a guess at how much the world’s most expensive burger costs.

Yep, you read that correctly — the world’s most expensive burger was served in Las Vegas in 2013. It boasted black truffles, Kobe beef, foie gras, and was paired with a rare — and expensive — red wine.

At The 4 Way Bar, we’re proud of our affordable prices and quality food. As the go-to local restaurant in Lakehills, our mission is to make the hamburger accessible to everyone who comes through our doors! We use fresh USDA-certified beef and take the time to make every order a work of art, even though it won’t cost you thousands of dollars.

2013 wasn’t just the year that the world’s most expensive burger was purchased. It was also the year that the first burger made with lab-grown meat was served! Although the project took nearly $330,000 to fund, taste testers found themselves surprised by the quality. At that price point, however, we’re guessing that lab-grown hamburgers won’t be on the menu anytime soon! 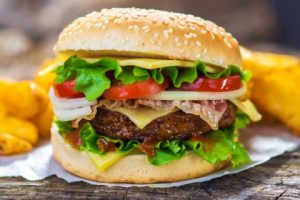 What do you order whenever you visit a new restaurant? You can never go wrong with a burger! Diners across the country agree, as it’s been estimated that hamburgers and cheeseburgers account for approximately 71% of the beef sold in restaurants in the United States. The next time you’re visiting somewhere new and aren’t sure what to eat, make the decision easy on yourself and order a burger!

Burgers Are Best Paired With Cold Beer and Friends

This fact isn’t anything you find in a book of world records, but that doesn’t make it any less true.

At The 4 Way Bar in Lakehills, we believe that every burger is better when combined with a cold beer and good company. We have a great selection of cold brews that hit the spot after a day in the Texas heat, and every burger on the menu is served with mayo, lettuce, tomato, onion, and pickles — also known as the staples.

We don’t stop at great food, though. We also host great events! Bring your friends to The 4 Way Bar & Grill for a night of poker, or come see one of the great live music acts that we’ve booked this month.

Not into live music or poker? No problem! We also offer pool tables, darts, and a great place to catch up with your friends.

What are you waiting for? Stop tempting yourself and come by the best restaurant in Lakehills for a delicious burger, a cold beer, and a great atmosphere!

GOOD food, COLD beer, FULL bar, LIVE music; what more could you possibly be looking for?

From burgers to fried pickles, shrimp, and more, your cravings are waiting to be satisfied with The 4 Way Bar & Grill.

Your night just got a lot better with us. Let the good times roll with live music and events the whole family is sure to love.

Located at the 4-way stop in Lakehills, you cannot miss us. When your stomach is saying it is time to eat, let us be your destination.

Finally, a reason to go out any day of the week. Contact us today to see what events are coming up and how to order online.